My adventures, fun times, and thoughts

On June 23 I went on an adventure with the Mazamas climbing Mt. Hood Sunshine Route which is the North side of Mt. Hood.  Our plan was to bivy around the 8500 foot level.  I got up that morning and was looking at the weather which did not look that promising.  I headed up to timberline lodge to meet the group which some of them I new from ICS, Linda, and assistant leader Eileen.  The leader I have had lectures from in ICS.  There was a total of 10 of us.  The plan was to leave some of the cars at timberline (South side) then head to Cooper spur and start on the North side of the mountain.  We started the climb around 10:30 am on Saturday.  It appeared that that weather was suppose to move in that night would could mean we will not summit.  We headed up the mountain toward the elliot glacier. We approached the area that we planned on camping at, and decided to do a carry over with our packs and climb the route in one day.  It was around 1pm now and we were making good time.  At this point we were at around 9K feet I believe.

We headed up to approach a dicey crossing after we first roped up and this lead to a steep climb! 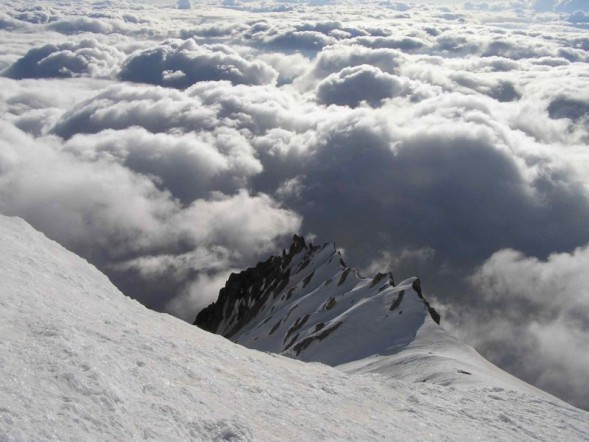 Look at the views!

The climb was great until we hit about 10,500 feet around the ridge separating the south from the north side.  The wind kicked up and the storm started to move in.  We hit the summit, then decended the route as soon as possible. That was the coldest I have ever been on a climb!  burrr. We had to front point on the way down because of icy and steep conditions.  We ended up back at timberline around 11:30 pm. It was a long day.